Regulations and Guidelines for Other Cetaceans

The Salish Sea is home to many different cetaceans including humpback whales, minke whales, porpoises and more. These marine mammals are protected by regulations in Canada and the U.S. which prohibit harassment and disturbance. Many species are threatened or endangered and subject to additional protections under the Endangered Species Act (U.S.) and the Species at Risk Act (Canada).

Marine mammals including cetaceans are protected in US waters under the Marine Mammal Protection Act (MMPA), with additional protection provided to endangered and threatened species under the Endangered Species Act (ESA).

These regulations prohibit take, which is defined as harassing, hunting, capturing, killing, or attempting to harass, hunt, capture or kill any marine mammal.

In the inland waters of Washington state, you must:

The Canadian Marine Mammal Regulations were amended in 2018 and require the following to avoid disturbance to marine mammals. Threatened and endangered species are additionally protected under the Species At Risk Act (SARA).

The Marine Education & Research Society (MERS) of Canada has created a campaign to provide further information about how to avoid collisions with marine mammals called “See A Blow? Go Slow!” This reminds boaters to slow down whenever you see a blow, or whale spout, and stay extra vigilant to see what direction the animals are traveling and how to best position their vessel to maintain a safe distance from the whales and still enjoy the view.

There has been a very fortunate increase in the number of Humpback Whales off our coast. The size and unpredictability of large whales like Humpbacks significantly increases the risk of collision and injury to both whales and boaters. Humpback also have a high risk of entanglement.

When you suspect you are in the vicinity of large whales:

If you experience or witness a collision or other incident of concern such as entanglement or disturbance:

For further detail on what to do (and NOT to do) regarding whale entanglement, please see “How to Save a Whale”. 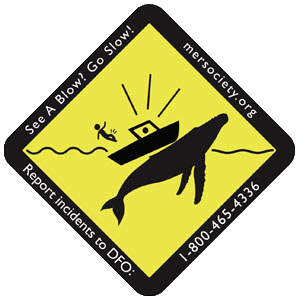 Trans-Boundary Guidelines for the US and Canada

Apply to all whales, porpoises, dolphins, seals, sea lions, any animal hauled out and nesting birds.

The noise and close proximity of UAV/drones can disturb wildlife. To prevent disturbances from an unmanned aerial vehicle (UAV/drone) over the marine environment, operators must use extreme caution. Fly during daylight hours, keep your drone in sight and limit your viewing time to reduce the cumulative impact.

When viewing marine mammals from the air using a drone: (1) maintain a 1,000-foot minimum altitude within a 0.5 nautical mile (approx. 3,000ft radius) of a marine mammal; and(2) avoid flight maneuvers around marine mammals (on land or in the water), as these actions may cause stress or alter animal behavior. Know and follow all local regulations – in Canada it’s the law.